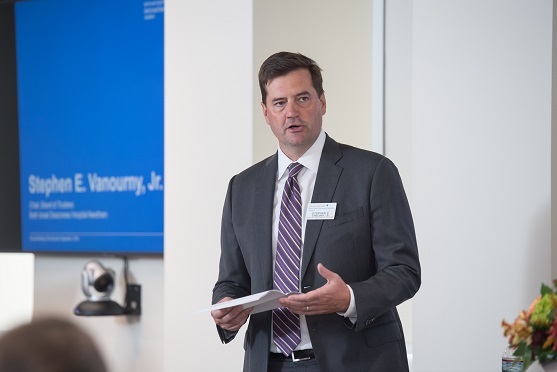 NEEDHAM, Mass. — At the recent Beth Israel Deaconess Hospital–Needham (BID–Needham) Annual Meeting of the Boards of Trustees and Advisors, the hospital announced that Needham resident Jana Kierstead and Wellesley resident Bruce Levine have joined the Board of Trustees. Eight additional local residents have newly joined the Board of Advisors.

The Annual Meeting brought together a special panel with local leaders to discuss the behavioral health needs of the surrounding communities, including reducing the stigma associated with mental health and substance use, heightening awareness and addressing access to behavioral health resources.

“As we gathered to discuss behavioral health and BID–Needham’s commitment to addressing unmet health care needs, we also welcome a distinguished class of new trustees and advisors who are deeply committed to our hospital and our mission,” said John Fogarty, president, BID–Needham. “BID–Needham continues to attract top-notch talent for our Boards of Trustees and Advisors; we look forward to their new perspective and ideas to help us make a difference in the health and well-being of the communities we serve.”

“I am pleased to welcome Jana Kierstead and Bruce Levine to the Board of Trustees,” said Stephen Vanourny, chair of the Board of Trustees. “As former advisors, Jana and Bruce have both lent their time, resources and depth of expertise. They share a belief in the mission of BID–Needham and the Beth Israel Lahey Health system and deeply are committed to our growth and success.”

“Our new advisors bring a tremendous amount of talent in the areas of finance, health care and community volunteerism,” said Seana Gaherin, chair of the Board of Advisors. “We are honored to add these eight talented local residents to further our connection to the growing health needs of the community.”

Jana Pompadur Kierstead is the executive director of the MBA and Doctoral Programs at Harvard Business School, a role she has held since 2012. She brings more than 25 years of experience to this role, including more than 15 years dedicated to leadership in business education. Ms. Kierstead was previously a director at A. T. Kearney’s media and entertainment executive search practice and held management positions with CBS Corporation and RP Companies. Ms. Kierstead earned a Master of Business Administration from the Kellogg School of Management at Northwestern University and a bachelor's degree from Cornell University’s School of Hotel Administration. She is a member of the Board of Overseers at the Museum of Science in Boston and was elected to the BID–Needham Board of Advisors in 2017. Ms. Kierstead resides in Needham with her family.

Bruce Levine is a principal at Equity Industrial Partners Corp, a commercial real estate investment company based in Needham. Prior to Joining EIP in 2007, Mr. Levine was a senior vice president and partner at CB Richard Ellis for 20 years. He is a graduate of the University of Massachusetts, where he majored in economics.

Mr. Levine currently serves as a board member for the Bridge Center and previously served on the board of The West End House boy’s camp. Mr. Levine has been a member of BID–Needham’s Board of Advisors since 2016. He is a lifelong Needham resident who recently moved to Wellesley, where he lives with his wife Aggie and their daughter Lily.

Peter Benham is a managing director at SVB in Boston, where he leads the East Coast health care and life science sponsor finance team. Drawing on over 26 years of corporate finance and banking experience, Mr. Benham provides customized financing solutions to support private equity and venture capital backed mergers, acquisitions and recapitalizations. Mr. Benham earned his bachelor’s degree in economics from Colgate University. He also attained his Series 7 and Series 63 securities licenses from the Financial Industry Regulatory Authority (FINRA) and was a recipient of SVB’s prestigious President’s Club Award in 2018. Mr. Benham spent his early years in England, France and Aruba and now lives in Needham with his wife and two children.

Samantha Trotman Burman worked as a principal and then partner at Parthenon Capital, a Boston-based private equity investment firm. Prior to that, Ms. Burman served as chief financial officer of Physicians Quality Care, a physician practice management firm. She was also an associate at Bain Capital, a private equity investment firm. Ms. Burman holds a Master of Engineering and Bachelor of Arts from Cambridge University, as well as a Master of Business Administration with distinction from Harvard Business School. She is a former member of the Board of Trustees of the Massachusetts Society for the Prevention of Cruelty to Children (MSPCC) and served as a director for 10 years of MedAssets, Inc., a publicly traded health care performance improvement company. She lives in Dover with her husband Mitchell and their four children. She enjoys travel, fitness and nutrition, flowers, and reading.

Ghania Y. El Akiki, MD, is the chief of Hospitalist Service at Beth Israel Deaconess Hospital–Needham. Dr. El Akiki joined BID-Needham after completing a geriatric fellowship at Beth Israel Deaconess Medical Center (BIDMC). She is a member of Harvard Medical Faculty Physicians and is board certified in Internal Medicine. Dr. El Akiki is an instructor of Medicine at Harvard Medical School. She received her medical degree from Lebanese University, School of Medical Sciences and completed her residency at Staten Island University Hospital. In 2018 Dr. El Akiki completed the Physician Leadership Program at BIDMC. Dr. El Akiki speaks Arabic and French and resides in Chestnut Hill with her family.

Erik Johnson is a managing director at The Bulfinch Group, a wealth management firm based in Needham. Mr. Johnson previously head coached Women's Basketball at Boston College and at the University of Denver. He played basketball at the University of California, San Diego, where he earned a Bachelor of Arts and subsequently started his coaching career at the University of Rhode Island, where he earned his Master of Arts in adult education. Mr. Johnson leads workshops for the Positive Coaching Alliance, coaches his daughter's Amateur Athletic Union basketball team, and is an assistant coach at Needham High School. Mr. Johnson lives in Needham with his wife Laura, two daughters; his son passed away unexpectedly in 2010 and is missed dearly.

Wanita D. Kennedy is an active community volunteer who raised four children in Needham. In addition to her interest in BID–Needham, Wanita is also involved with Catholic Memorial High School and the Massachusetts College of Art and Design. Prior affiliations include co-chair of Needham Steps Up, a mentoring program at Needham High School for students from low-income families, board member of Needham High School Boosters, St. Joseph Middle School Consultative Board and past-president of Needham Newcomers. Ms. Kennedy graduated from Averett College in 1986 with a Bachelor of Science in Management/Psychology.

William J. Kennedy, Jr. is a co-founder and managing partner of Falcon Investment Advisors, an investment management firm based in Boston. Mr. Kennedy was previously with John Hancock Life Insurance Company, where he held the positions of managing director and corporate secretary of Hancock Mezzanine Investments, LLC. He graduated in 1985 with a Bachelor of Science in Business Management from Susquehanna University and is a CFA® charterholder. Mr. Kennedy has been a resident of Needham for more than two decades with his wife Wanita and their four children.

Ellen Mahoney, MD, is a primary care pediatrician and managing partner at Wayland Pediatrics. Dr. Mahoney has been practicing pediatrics in the Boston area for more than a decade and is committed to the concept of community medicine. Dr. Mahoney received her medical degree from the University of Massachusetts and did her pediatric training at Hasbro Children's Hospital in Providence, Rhode Island through Brown University. She is a member of the Massachusetts Medical Society and a fellow of the American Academy of Pediatrics. A lifelong resident of Needham, Dr. Mahoney continues to reside there with her husband and children.

Jennifer A. Pline is the executive vice president and the head of Wealth Management at Cambridge Trust Company. She previously was at Harvard Management Company where she served as managing director, Chief Trusts & Gifts Officer. Prior to that, she worked at Standish Mellon Asset Management for 18 years and was the director of Client Service when she departed. She is a graduate of Boston College, where she also received her Master of Business Administration. She holds the Chartered Financial Analyst® designation. Ms. Pline’s board affiliations include serving as a trustee of Concord Academy. Ms. Pline and her husband Hans Oettgen, MD, PhD, reside in Wellesley with their two daughters Hannah and Karly.

Carrie Reddish, DMD, PC, has been practicing general dentistry in Needham for more than 15 years. Dr. Reddish has owned the practice for five of those years, offering the highest level of dental medicine and compassionate care for adults and children in Needham and surrounding towns. Dr. Reddish received her undergraduate degree from Stonehill College and then attended Tufts University School of Medicine. She was awarded her doctorate in 2001. She is a member of the American Dental Association and the Massachusetts Dental Society.

Lisa Schwarzberg is the chief operating officer, managing director, and partner of Evolution Credit Partners Management, LLC (Evolution Credit Partners), an investment advisory firm focused on direct lending. Ms. Schwarzberg has more than 20 years of financial and operating experience, with a focus on working with middle market companies. She graduated with a Bachelor of Arts in Economics from the University of California, Los Angeles (UCLA), and a Master of Business Administration in Finance from UCLA’s Anderson School.

Rebecca Stone, MD, is a partner at Boston ENT Associates, affiliated with both BID–Needham and Faulkner Hospital. Dr. Stone graduated with a Bachelor of Science in Biological Sciences with Distinction from Cornell University. She attended the University of North Carolina, Chapel Hill School of Medicine where she graduated with distinction. Her otolaryngology training was at Boston University Medical Center where she was administrative chief resident in 2007. She won the Jalisi Excellence in Teaching Award in 2006 and 2007 and

previously served at Medical Staff president at BID–Needham. She enjoys singing, athletics, and learning Spanish, in which she is medically proficient, as well as spending quality time with her husband Ted, as well as their three children, Will, Jack and Lauren and their British cream golden retriever, Chowdah.